All cylinders used to store gases under high pressure must be regularly checked for safe handling and filling. This applies to oxygen bottles, helium buffers, sport shooting bottles and of course diving tanks. Official guidelines are available for this per industry or sport.

At Scuba Support we offer the following services:

It is recommended to have the cylinder internally checked for rust, moisture and oil every year. Then the inside of the bottle is viewed and assessed with an inspection lamp or camera. If rust, moisture or oil is found, the cylinder must be treated.

If there has been rust in the cylinder for too long, it may be that the wall or bottom of the cylinder has been affected with pitting corrosion. This weakens the wall or bottom and it may be that the diving cylinder is rejected. In order to prevent rust from going on for too long and the cylinder being rejected as a result, it is therefore advisable to visually inspect the diving cylinder annually. You can also be sure that there is no contamination in the bottle, which can negatively affect the functioning of the regulator or your breathing gas! 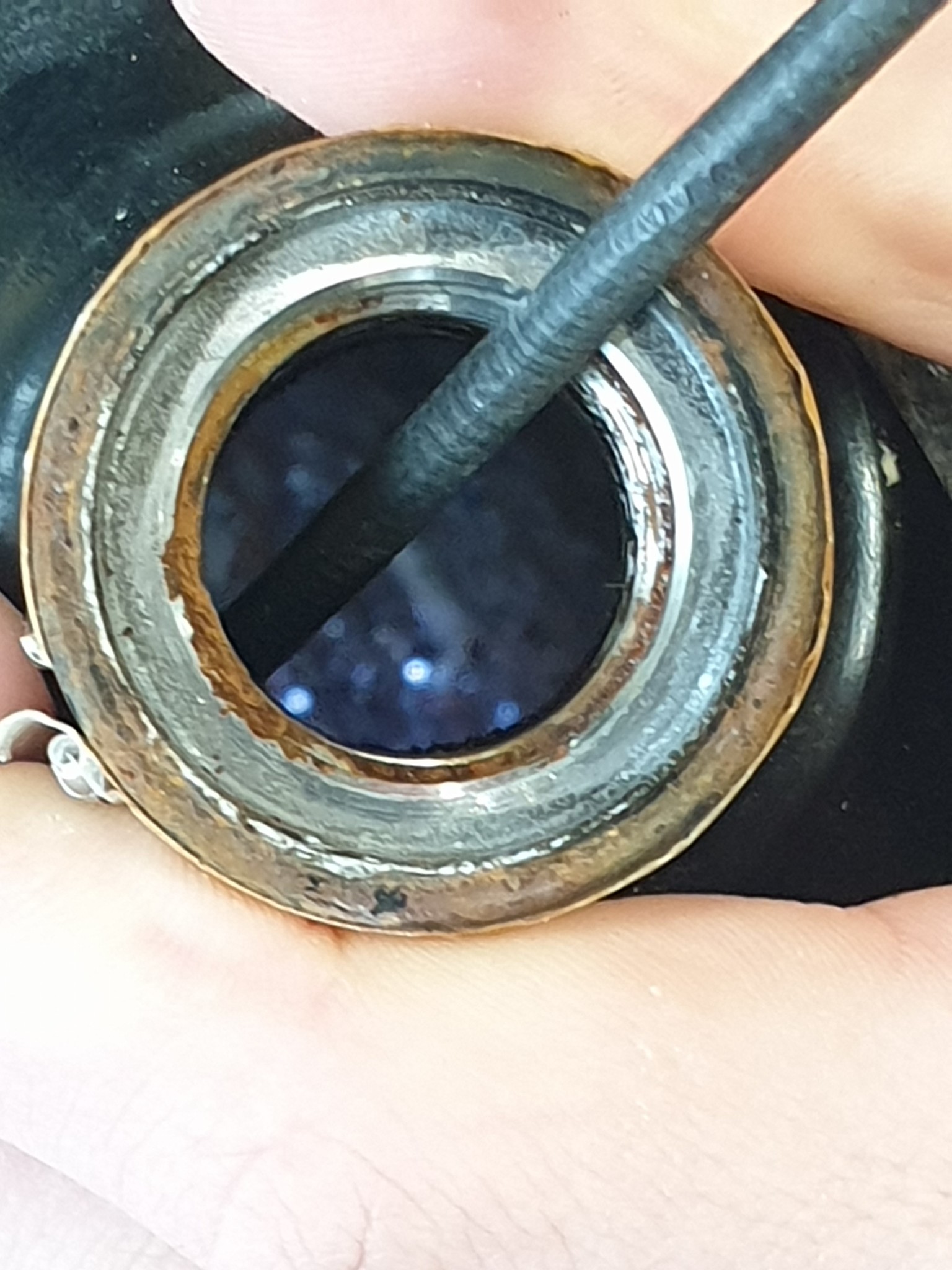 During a visual inspection, we also immediately take care of the tank valve. First, a Silencer is screwed into the tap, which reduces the sound considerably while letting the air escape. When the pressure is off the bottle, the tap is loosened and disassembled with a bottle tap disassembly tool, the parts are cleaned in an ultrasonic bath and the moving parts, such as O-rings, are replaced.

Incidentally, during installation, it is also checked whether the threads of the tap and the bottle are still in order and that they fit together properly. Turning the wrong tank tap on a scuba tank can and will lead to accidents. Some threads are so similar that unfortunately this error occurs more often than you think ... 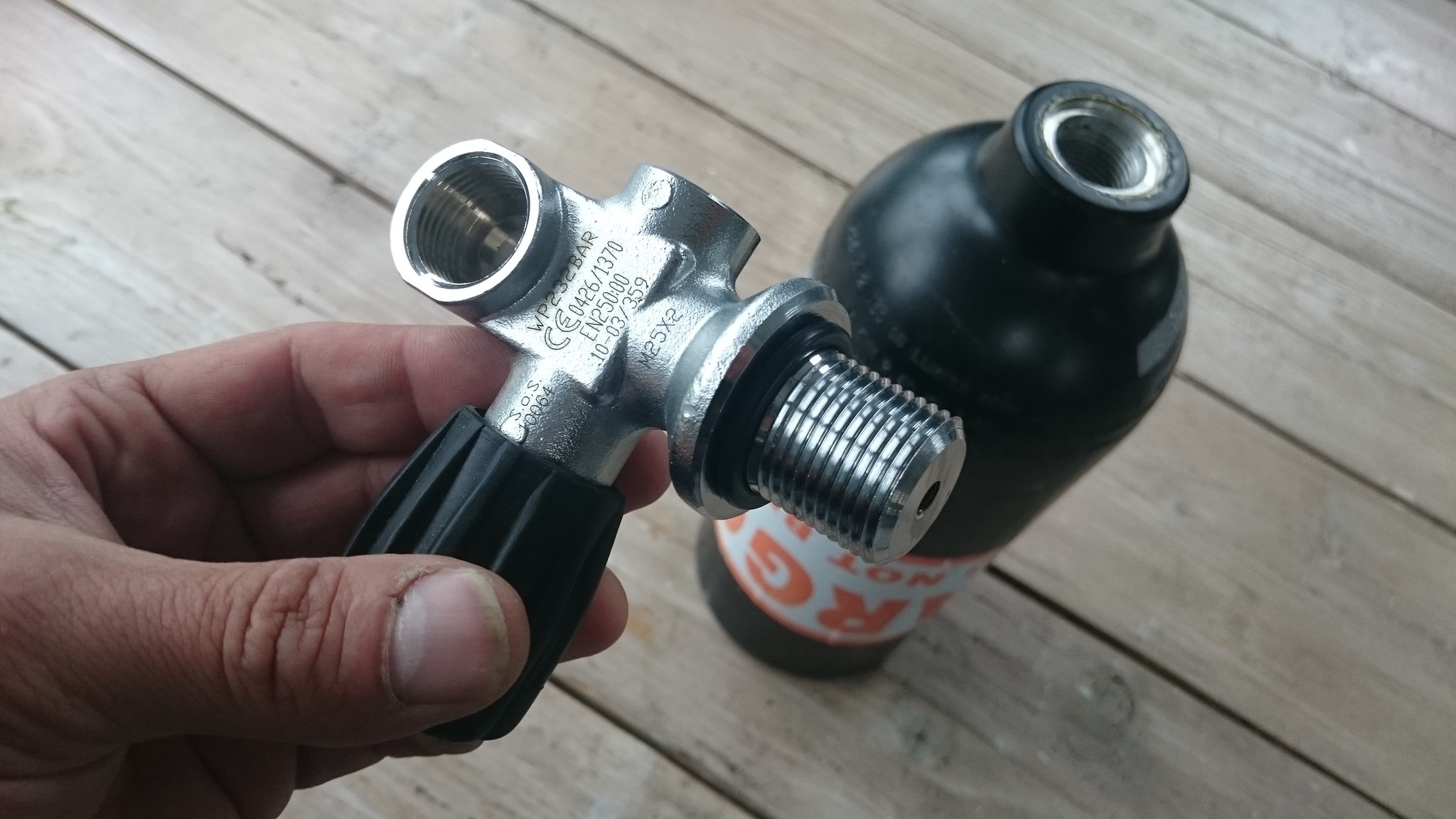 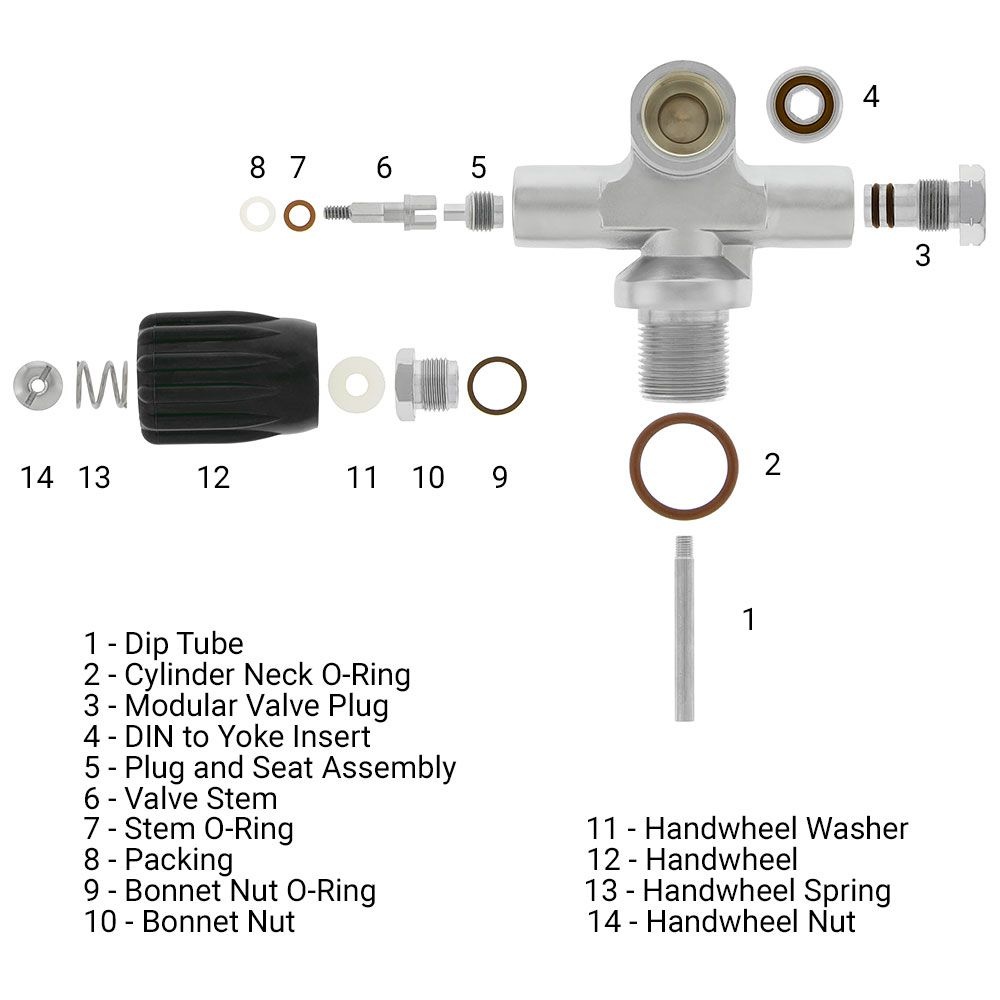 If the bottle passes the test, it will be stamped in the bottle neck and is approved again for a period of 5 years. If rejected, the bottle will be made unusable.

A diving cylinder that has not been inspected for more than 5 years may no longer be officially filled. A diving center or filling station will always check the date in the bottle neck when filling. 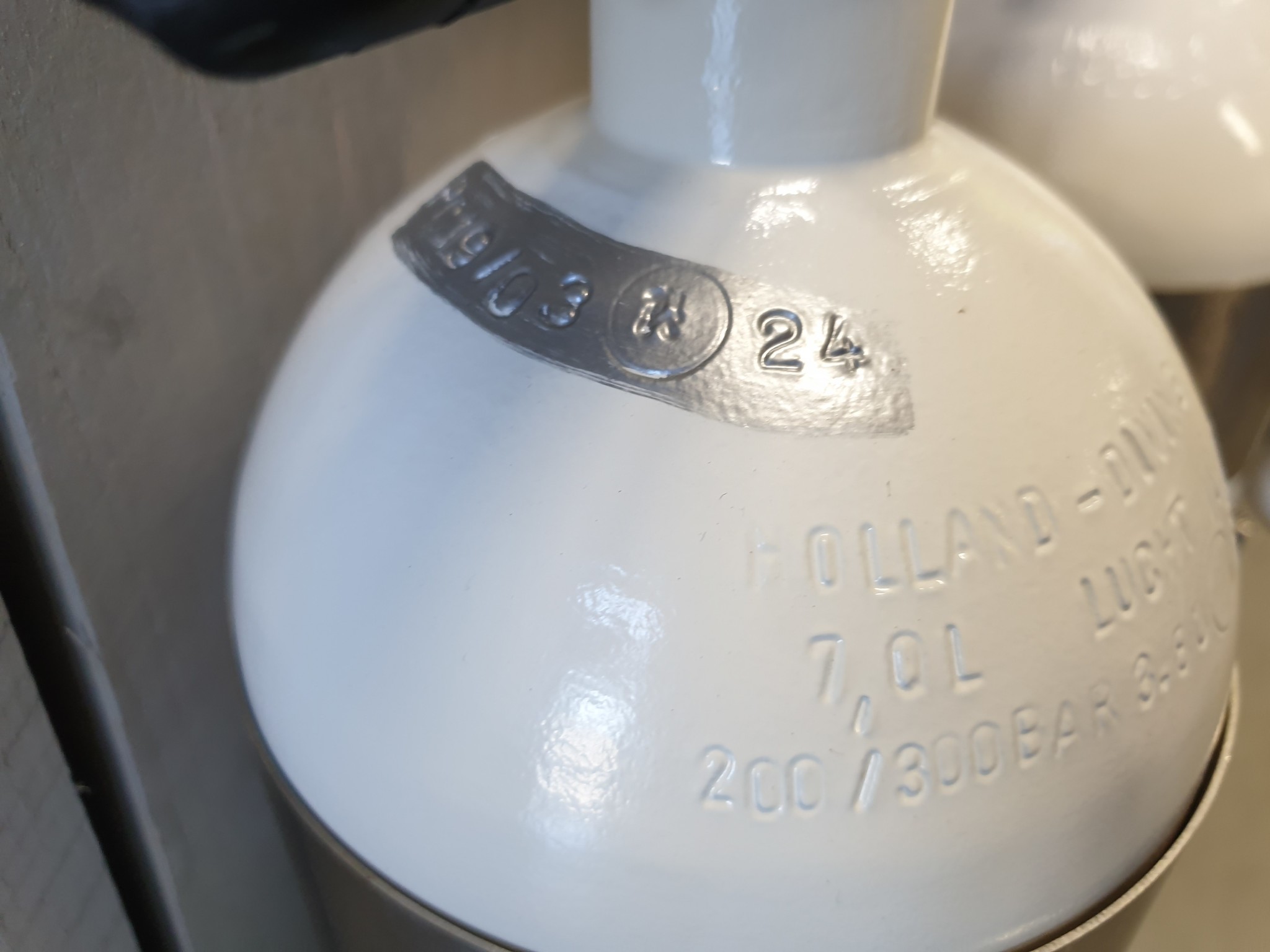 During the hydrostatic inspection, the diving cylinder is also internally inspected for moisture, rust and oil.

Incidentally, the hydrostatic test is not carried out by Scuba Support itself, but by a central authority; Lloyd's Register Stoomwezen. Scuba Support collects diving bottles every X weeks and ensures that they are inspected by the Stoomwezen. 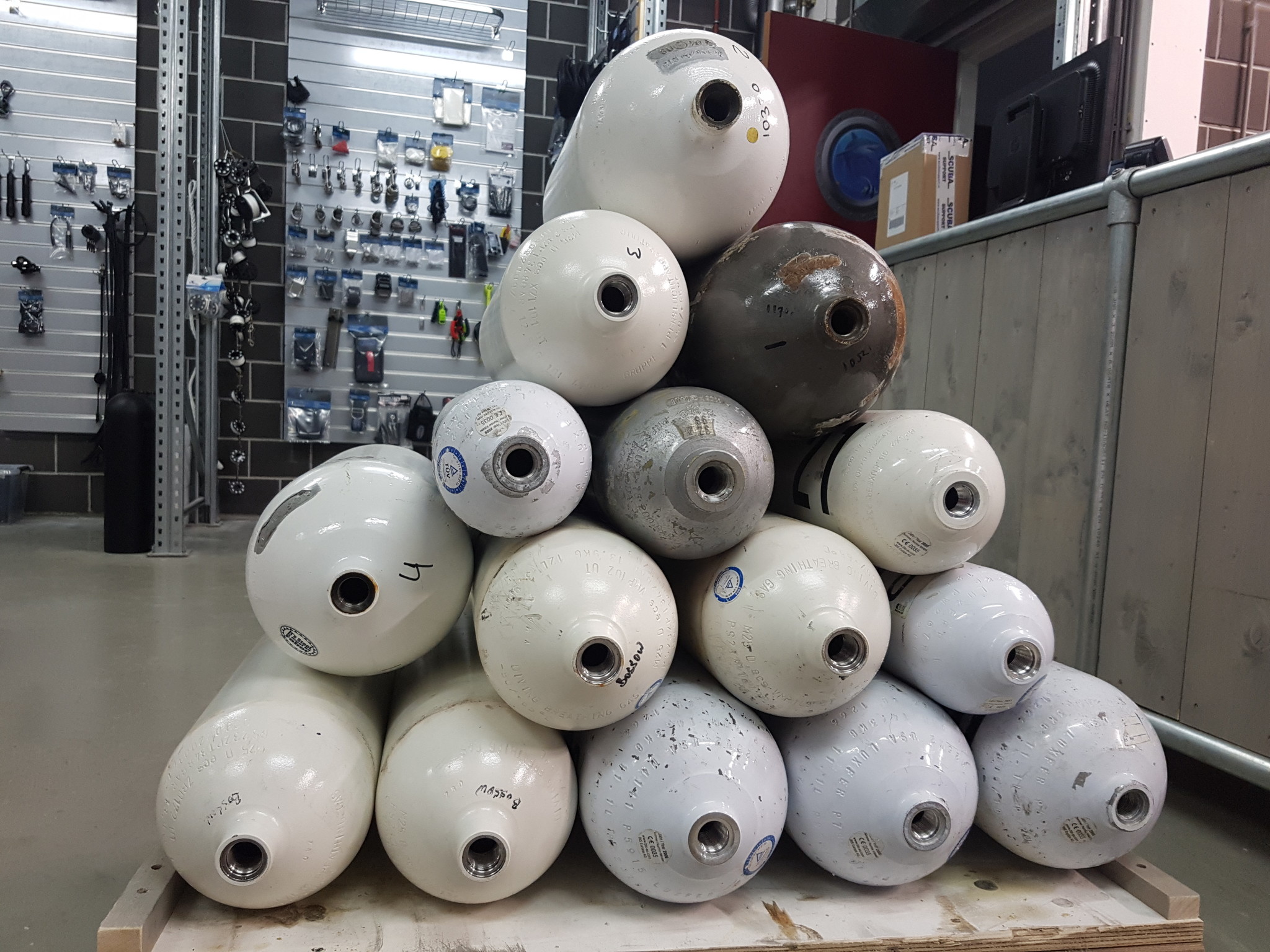 Treatment of the bottles

If any irregularities are found during one of these inspections, the tank will need to be treated to be able to dive safely again. There are also different treatments for this, depending on the problem:

If there is rust in the cylinder, it must be drummed or blasted internally, a technique that removes the internal rust. During the drumming, the cylinder is filled with granules and placed on a machine that spins the cylinder for hours, loosening the rust. During internal blasting grit (often made of stainless steel) is blown against the wall with a special nozzle under air pressure on the inside of the diving cylinder. This will knock the rust off the wall. 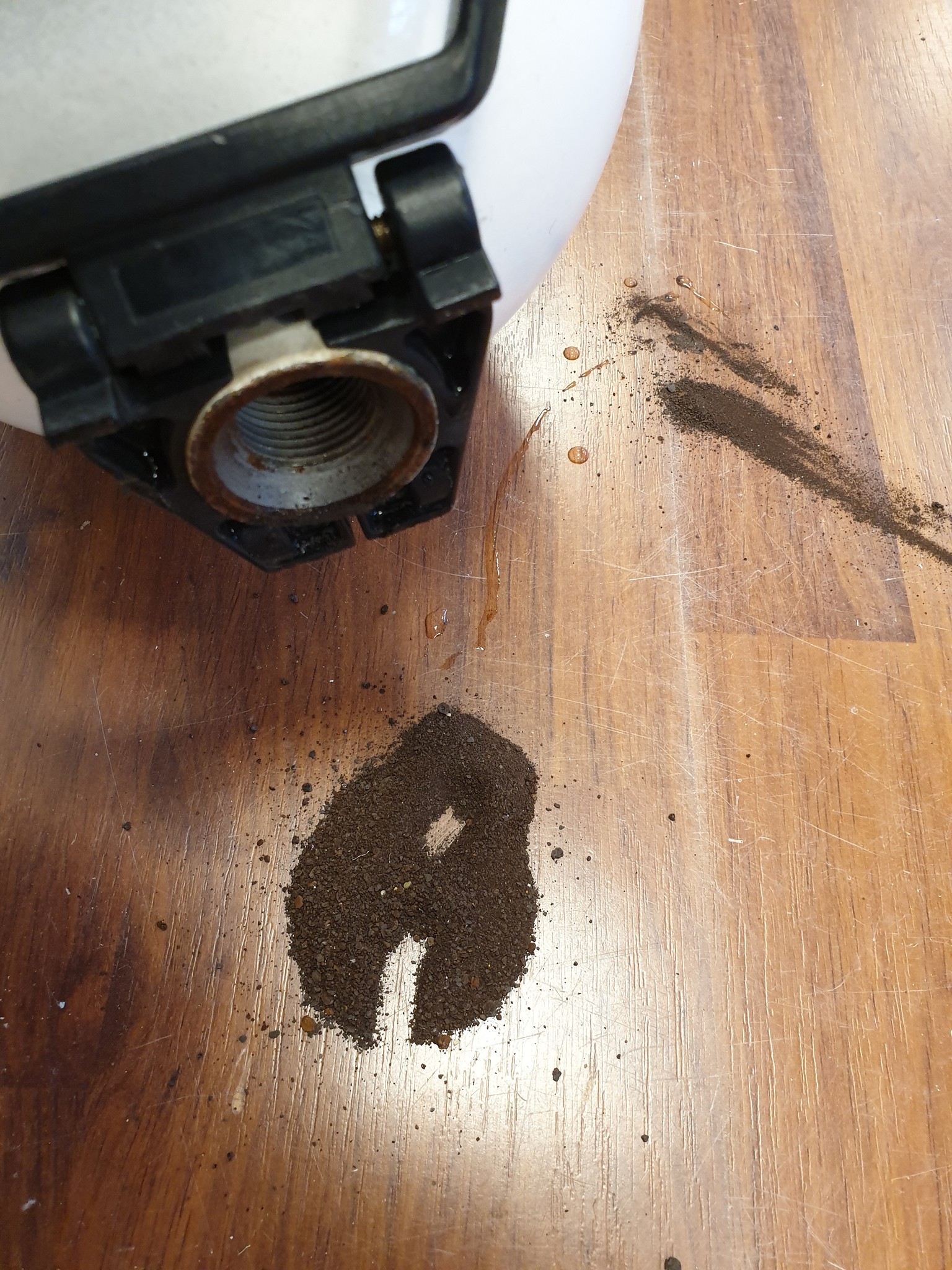 If a diving cylinder has been completely empty for a while, moisture can enter the bottle. This can happen underwater, but also above water, due to the humidity. Due to a defective or poorly maintained compressed air compressor, moisture or oil can also enter a diving cylinder. In all these cases, the bottle must be cleaned internally.

If rust has developed on the outside of the bottle, the bottle may need to be blasted and given a new coat of paint. Sometimes this already happens during a hydrostatic test by the Stoomwezen, because otherwise the bottle cannot be approved. Additional costs may then be charged. At Scuba Support we often see rust formation on the underside of bottles that have a bottle base. That is why omitting bottle feet is sometimes better to protect your bottles. 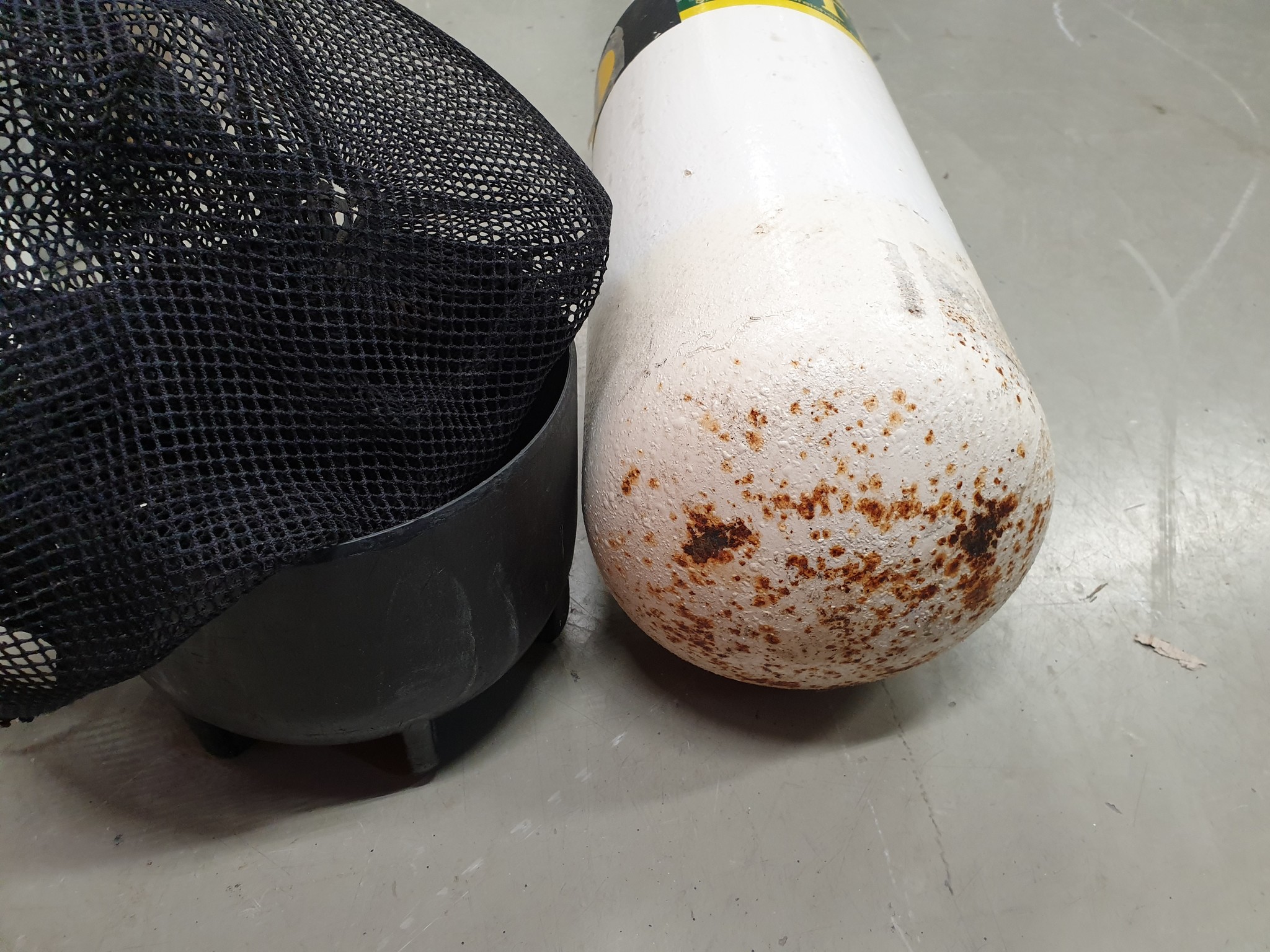 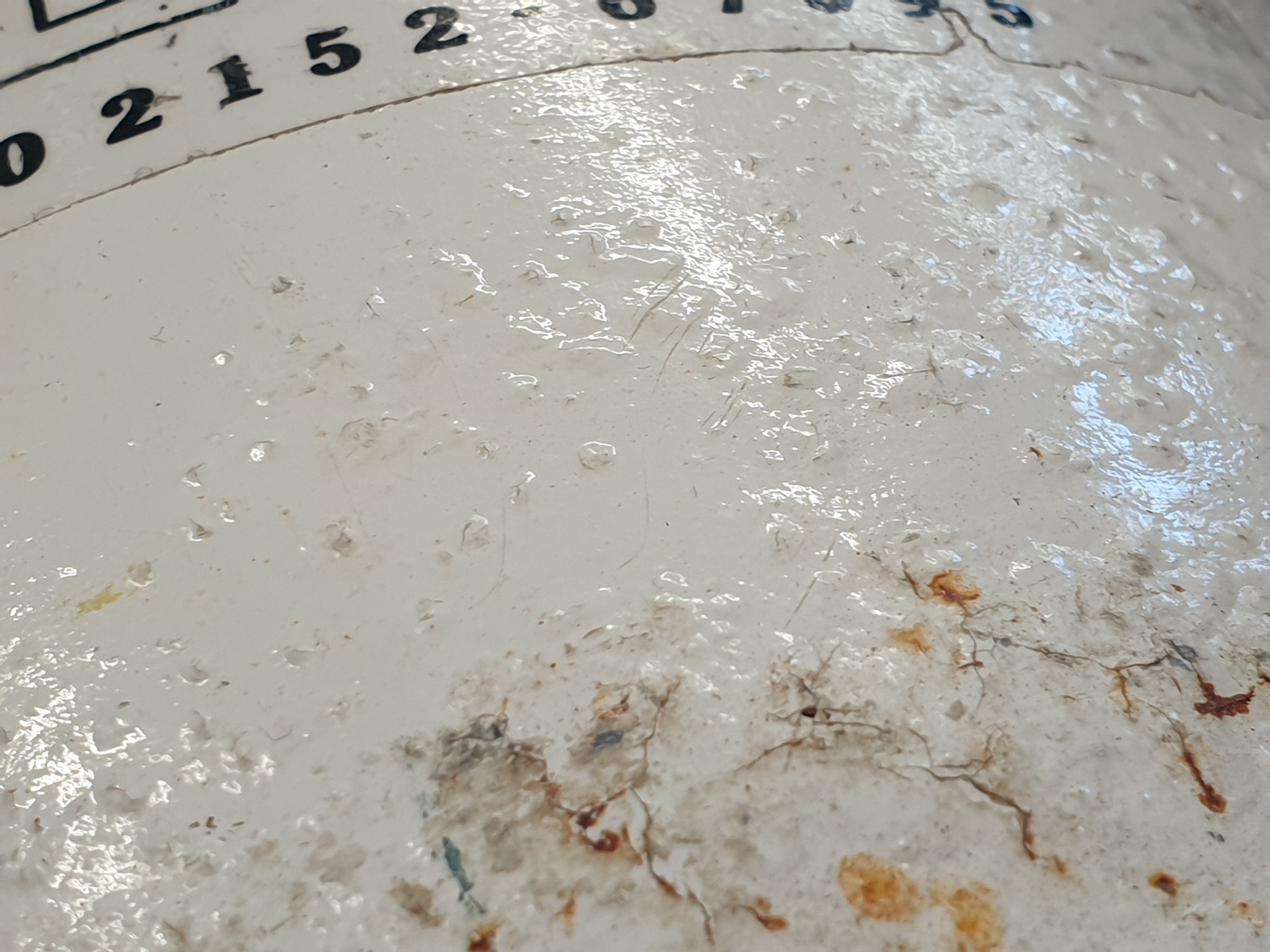 For an oxygen fire or oxygen explosion in diving equipment you need three ingredients, the so-called "fire triangle":

With oxygen service, mainly fuel and ignition source are tackled, because the oxygen is present anyway.

It is good to have the relevant terminology clear:

Oxygen compatible means that the material is suitable for use with oxygen percentages higher than 40%. Think of Monel, Brass and some stainless steel alloys. Standard O-rings made of NBR must also be replaced by EPDM or Viton.

Oxygen-clean means that the material has been cleaned according to strict regulations and thereby stripped of hydrocarbons and silicone grease, substances that serve as fuel in the fire triangle. This is done, among other things, with the help of an ultrasonic bath, filled with Blue Gold, a special industrial cleaner that dissolves the hydrocarbons and fats. After a thorough rinse with clean and softened (hot) water, the parts are blown dry with clean oil-free compressed air.

The bottle tap is then reassembled using special gloves and cleaned tools in accordance with established standards. During assembly, the parts are greased with Christolube, an oxygen compatible grease that ensures that the bottle tap can run smoothly.

The cylinder itself is also rinsed with Blue Gold Industrial Cleaner and then rinsed with hot, clean and softened water. The bottle is of course immediately blown dry with clean compressed air to prevent rust from forming in the bottle.

Then the bottle valve is mounted on the diving cylinder and the whole thing is provided with a sticker that shows that the bottle has been cleaned oxygen.

Note: A bottle can then, due to improper use or filling with a dirty compressor, immediately become contaminated again and therefore pose a danger again when used with high oxygen percentages. use guidelines wbt maintenance of the compressor. 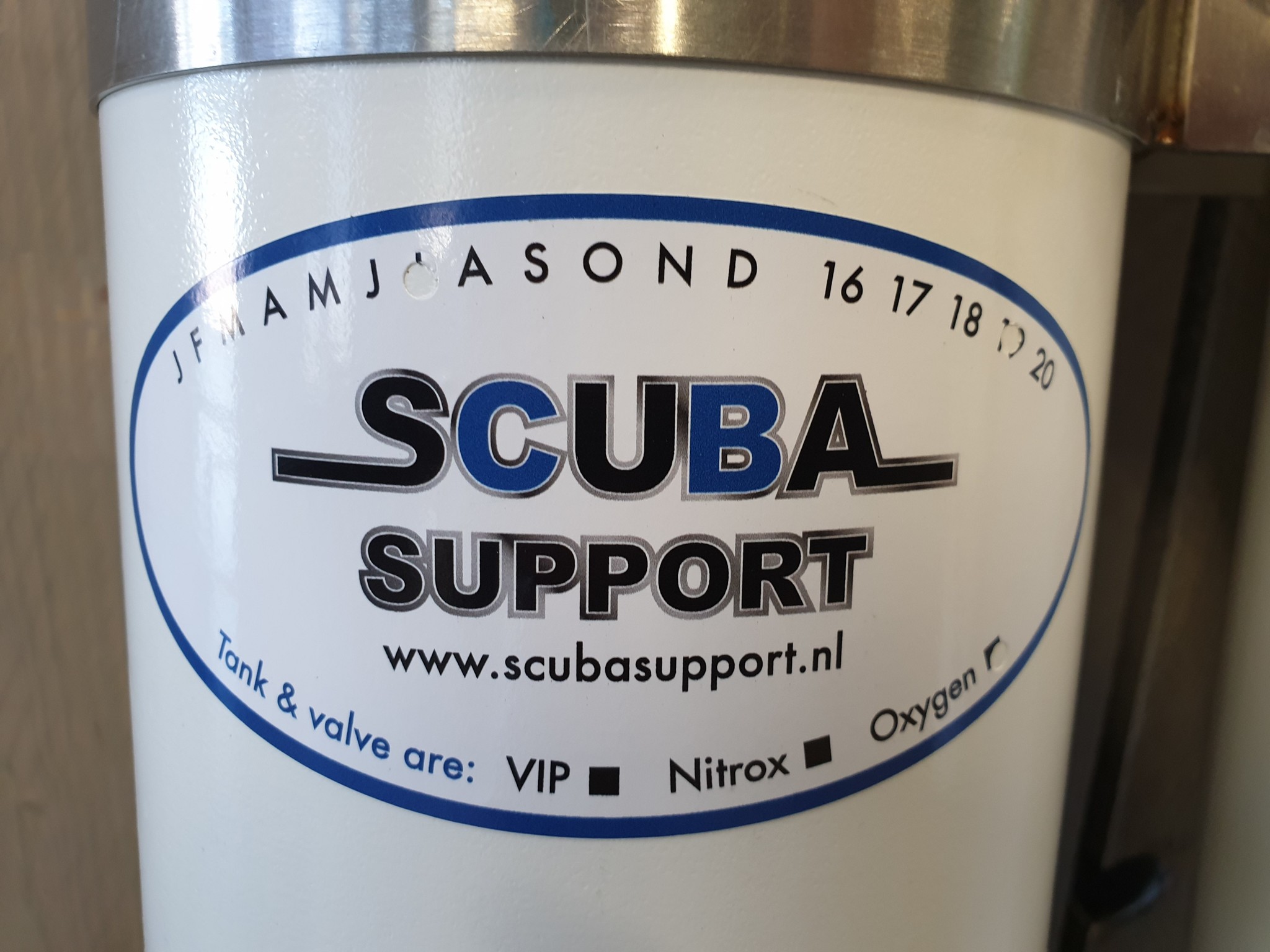